In the aftermath of Hurricane Maria, CTA distributed 98 tons of alfalfa/timothy; 112 tons of feed; 30 tons of shavings; 28 pallets of medical and equine supplies; 10 pallets of relief supplies; and over 56 tarps.

Since 2017, CTA, the only rescue dedicated to racing thoroughbred in the Caribbean, has responsibly retired 268 Thoroughbreds. Of those, CTA has spent over $500,000 in travel costs to return 162 of those horses to the US mainland to either retire with past connections, live out their retirement in sanctuary, or find new homes and second careers.

On October 19, 2017, CTA flew out our first group of 7 horses to the mainland to be retired to connections and other facilities. Below is an update on those 7 horses. 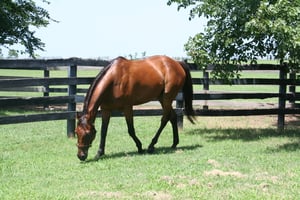 Rodriguito retired to CTA farm after hurricane Maria. He’d raced an incredible 150 times! The Exceller Fund offered him a sanctuary home along with SweetLandOfLiberty. Rodriguito (Felix) and SweetLandOfLiberty (Sam) became inseparable at The Exceller Fund. They were dubbed “The Islanders” and spent their days together. Rodriguito passed away in early 2022. He had friendship & excellent care for more than 4 years. 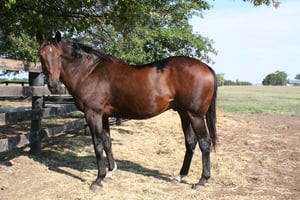 SweetLandOfLiberty
SweetLandOfLiberty, a 2006 Florida-bred gelding with 139 starts. He raced in south Florida at both Calder (now Gulfstream West) and Gulfstream Park at Suffolk Downs. He started with his breeder. CTA tried to retire him prior to his 100th start.

It took nearly 2 years of advocacy to finally get him retired on 8/21/17,  after his 139th start and
1 month prior to hurricane Maria, SweetLandOfLiberty is safe and living his best life at The Excellar Fund in Oklahoma, where he has been able to recover from the loss of his best friend Rodriguito earlier in 2022 by building new friendships with his pasture mates.

Update from The Excellar Fund:
At age 16, he’s changing shape a bit, i.e., getting a little low in the back and a stout neck from all the cribbing. It’s been a brutally hot dry summer (and continues) so he and his pasture pal spend lots of time in their shed munching alfalfa under two big fans.  We’re all ready for fall. 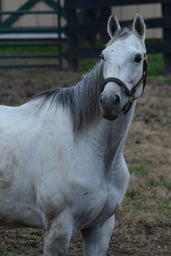 Winning Dubai
Winning Dubai, a 2009 KY-bred 96-bred retired to CTA in January 2017. Kelley right away knew he was special. He’d raced only in Puerto Rico and we decided he’d remain at CTA and be an ambassador.

However, after Hurricane Maria, CTA decided Winning Dubai would be better at a sanctuary back on the mainland. Old Friends in Kentucky, his birth state, offered him a forever home. Winning Dubai spent his days in beautiful rolling green Kentucky pastures with pasture mates. Sadly Winning Dubai passed away on March 28, 2021. He will be missed by many. 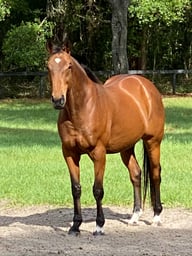 Poker Dave started his racing career in California, racing at several tracks there. He also raced in Oregon and Arizona before coming to Puerto Rico at age 9. His breeders, Randy & Karen Hickman of Stone Ridge Farm in Ocala, kept tabs on him Throughout his career and became dismayed when he had a poor race. They contacted the Florida Thoroughbreds Breeders and Owners Association which helped them contact CTA.

The Hickmans came to Lorraine’s Horse Transport layover barn to help CTA care for the other 6 horses. They bathed, fed, and grazed these weary travelers. The Hickmans even took in Winning Dubai to care for him while he recovered from an abscess he developed. 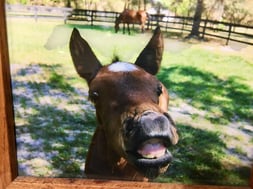 Update from the Hickmans: Poker Dave AKA George has been back home for 5 years in October- I think he is really enjoying his retired life living with his Mom - he lives up to his nickname Curious George as he knows everything that is going on around here esp when it comes to getting his favorite treat: carrots!!! He is very playful and always tries to get his Mom to run around with him- we want to thank CTA especially Shelley and Kelley for helping us get him back home. Photo of Dave as a colt. 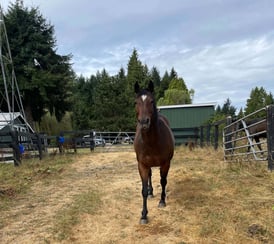 Ugottabcatty won in his first race. He was first owned by Jim Foulkes & his good friend Alaina O’Brien helped raise him. He ran until age 8 in Washington state & was claimed in August 2014 at Emerald Downs in Washington state. Jim Foulkes tried to claim and buy him back and he and Alaina were upset when they learned he was running in Puerto Rico. After the hurricane, they were determined to help him get home. Alaina managed to contact CTA and Kelley located him at the track. He’d been without hay and had a bad bout of colic.

Update: Alaina said he’s still doing well. He’s been fully retired for 5 years and is enjoying “just being a horse.”

Lallie
Lallie raced 18 times at ages 2 & 3. 8 years at Gulfstream & Gulfstream West and 10 years at Camarero from January- July 2017. Lallie’s prior owners from Gulfstream contacted CTA in early October 2017 offering her a home and financing to get there (They’d previously donated to help Immortal Wink in 2016). Kelley found Lallie at Camarero & offered to take her. 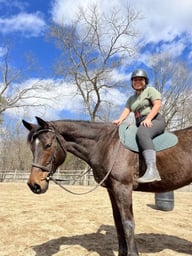 Lallie is absolutely wonderful, and I'd love to give you an update. She never acted like her adventure on the island bothered her a bit, and she has so far refused to brag about being a hurricane survivor. She may be a mare but she doesn't have an ounce of diva in her haha. We have a close relationship with a lady in Long Island who runs a lesson program for kids, and once Lallie had some retraining under her belt we sent her up there to see how she'd get along. We thought her laid-back nature might make her ideally suited for it. True to character, she took to it right away.
After a year or so a little girl fell in love with her, and for the last couple of years they've made a perfect-and it looks like permanent pair. We get updates regularly and are always prepared to offer support, but so far Lallie has been one of our easiest retirees (despite the hard work it took from a team of people to get her here!) It's so hard to believe it's been five years already! Photo of Lallie with her person ❤️. 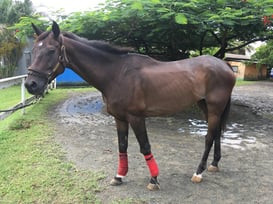 He retired to the CTA farm in August 2017 after CTA advocated for him to be retired. He was thin with wear and tear from years of racing, but what a sweet, gentle & kind boy! Prior to quarantine, Victor suffered from a bad bout of colic, which delayed his original departure date. Victor finally left on the first flight out after the hurricane and arrived at his birthplace, Fallbrook Fall, in late October. 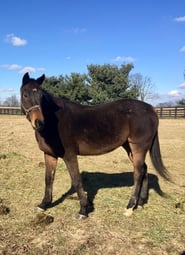 Kelley and Shelley visited him in January 2018 and the transformation was incredible! Photos: Victor Spider 2 days after his final race at Camarero in 2017, and Victor in retirement, fuzzy, fat, and happy!

Breeder steps up to get horse home from Puerto Rico 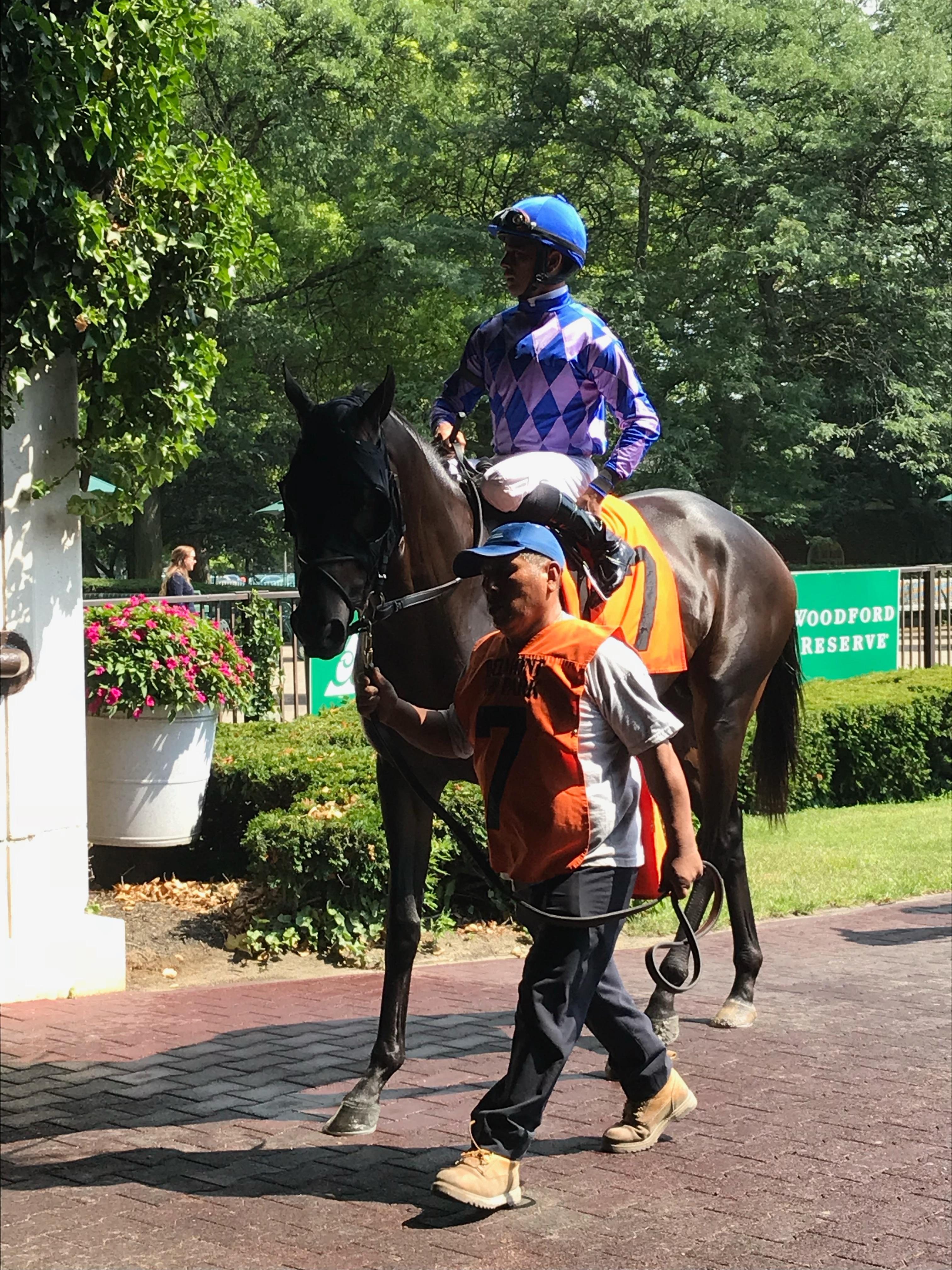 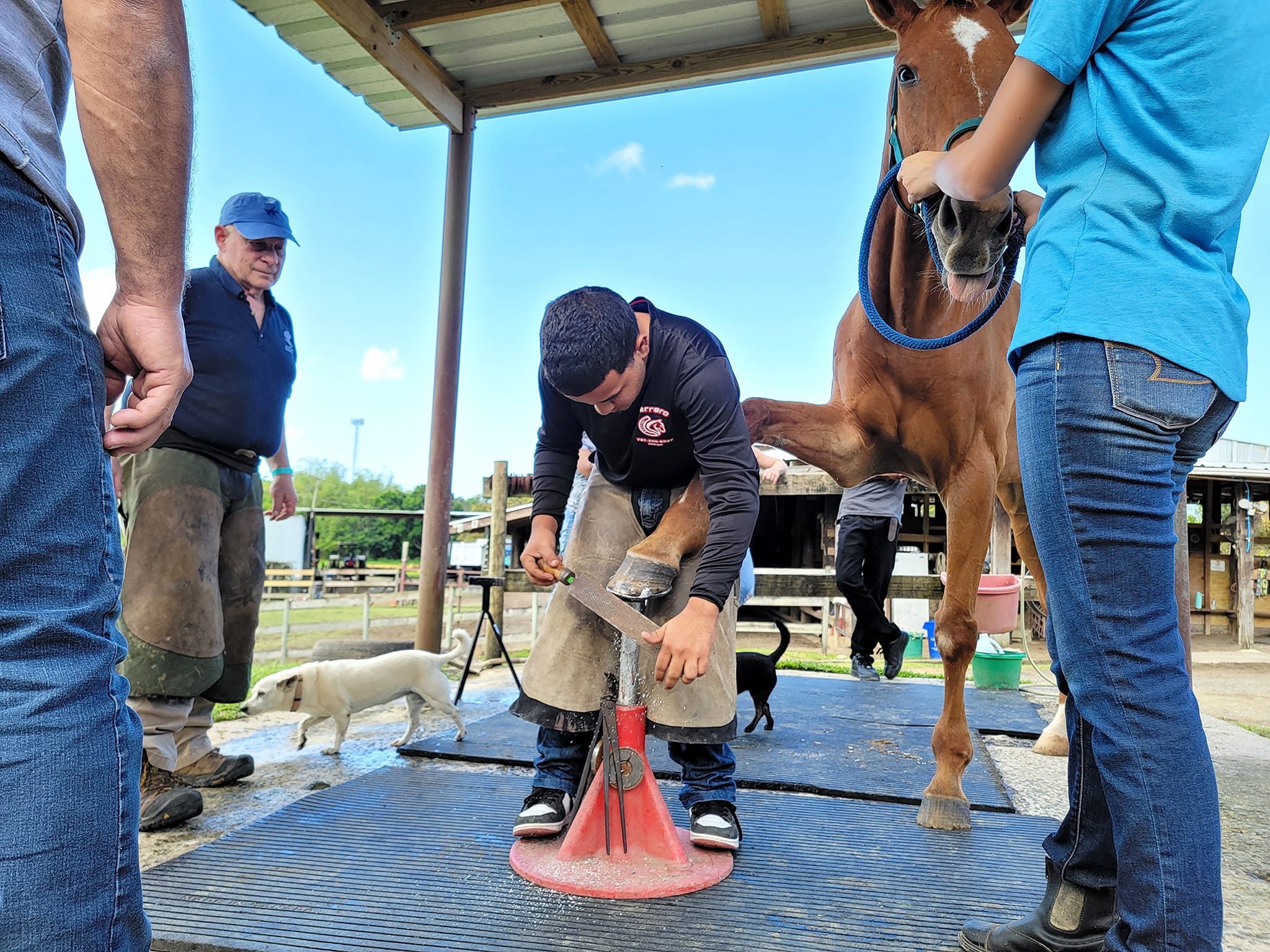